The A Pennant semi finals were contested at Marton Golf Club on Sunday. Both matches were expected to be close throughout.

Manawatu took on Feilding and were 2.5 - 1.5 up after the morning foursomes. Despite some close afternoon matches with 3 matches going down the last hole, Manawatu remained in front throughout and won the singles 5 - 3. The final result was Manawatu winning 7.5 - 4.5 to secure hosting rights for the final.

It was the other semi final between Palmerston North and Taihape that caused the most drama. Taihape led 2.5 - 1.5 after the foursomes, so went into the singles matches needing 4 wins to secure the win. And the win was looking probable for Taihape after Matt Booth and Koke Cashell both had clutch wins 1 up on the final hole. That left the matches at 3 and 4 to be the deciders with darkness approching quickly.

Mike McSherry had battled from 5 down against Denny Thompson to be all square up the last, but had left himself right up the back of the green and facing a long and tricky downhill putt to give Palmerston North any chance of victory. Amazingly the putt found the bottom of the cup, resulting in rapturous applause from the Palmerston North team and supporters, that may have been heard back at the Palmerston North course! Absolutely great to see!

However all was not over yet as Palmerston North's Tane North - new to the team this year, was left to get up and down from left of the green to secure a one up win against Ben Cribb. The chip went about 6 feet beyond the pin leaving a tricky putt under the circumstances on a sloping part of the green. We are not sure if Tane knew the full importance of the putt of not, but the situation was on a knife edge, and if the putt missed the final match result would be all square.

The rules state that when a semi final match finishes all square then the number 1's would go to sudden death playoff. However with darkness falling quickly there would be no time left for a playoff, which meant that the winner would be the team that won during round robin. Taihape won that match.

So that tricky 6 foot putt had to go in for Palmerston North to advance. After taking his time to ensure he was confident with the line Tane struck the putt firmly at the hole, and I believe he started his celebration about a foot out from the hole, knowing it was heading dead centre. Once the ball had gone in the Palmerston North team once again erupted into a scene of a mixture of delight and disbelief of what had unfolded on the final green. Taihape were obviously disappointed, but took the narrow loss very well congratulating the Palmerston North team for their final hole heroics.

For the competition this was a fantastic advertisement for having semi final / final playoffs. We hope that the final played this Sunday between Manawatu and Palmerston North, at Manawatu will produce a similar close result down the final hole.

A huge thanks must go to Marton Golf Club for hosting the day. Shay Melis and the Marton Club had the course prepared in fantastic condition, and it was a very popular decision amongst the players to have the A Grade semi final playoff's.

Good luck to both Manawatu and Palmerston North this coming Sunday. 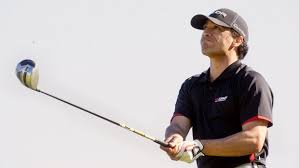