The Women's Toro Interprovincial is being played at Muriwai Golf Club situated right on the coast west of Auckland. This is a top class links course which is very exposed to strong winds off the Tasman Sea, which often makes playing conditions difficult. All 14 districts take part in 5 person teams in matchplay competition with the top 4 teams playing semi-finals, then the winners competing for the title in the final. 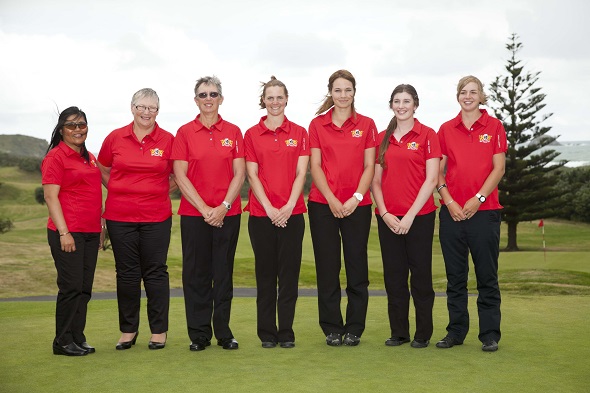 The first day of the Interprovincial had the team face Otago in the morning and Taranaki in the afternoon, both of which were must wins if the team is going to challenge for a semi final spot. After the the great win from the men last week the girls will be inspired to also show everyone that they are also a force to be reckoned with.

Against Otago all the girls started well and in the end prevailed as 3/2 winners, which was a great result first up. Emma Clayton at number 2 had a big win 6/5 to continue her good form leading into the event, and the new players in the team Leanne Corbett at number 4 and Karen Manninen at 5, sealed the win with comfortable victories. Brydie Hodge at number 1, went down but has a difficult task this week against some high quality opposition, however has the quality herself to win most matches this week if she plays to her potential. Amber-Rose Thompson-Newth also went down in a tight match at number 3, but has also proved this year that she will be a tough opponent to beat throughout the remainder of week.

Round 2 has the team facing neighbours Taranaki, whom we had have mixed results against this year in the two annual clashes. At the Sybil Green in Paraparaumu our girls were well outplayed, however we turned that around at Wanganui a few weeks back. Therefore the girls would be confident going into that match after the recent win. And so it proved with our players prevailing 4/1, with Brydie, Emma, Amber-Rose and Karen all winning their matches. Only Leanne went down in her match against Holly Winter, whom has played higher up the order in the past for Taranaki.

With two wins from two, Manawatu Wanganui sit on top of their group table, however have the bye in round 3. The favourites for the semi finals in that group will be Wellington and Bay of Plenty, so the team will be eyeing up good performances against those teams later in the competition to challenge for the semi-final. We wish the team all the best for the remaining rounds.

The Manawatu Wanganui team had a bye in the morning, which is great opportunity to relax and prepare for the afternoon match against Tasman.

The match against Tasman was a great opportunity for the girls to cement a position at the top of the group before the more difficult matches ahead against Bay of Plenty, Wellington and Hawkes Bay. And the girls delivered with a dominant 5 - 0 win. This means that all the girls have had at least 2 wins and so far Emma Clayton and Karen Manninen are unbeaten. With Hawkes Bay defeating Wellington it has opened up this group also. If Manawatu Wanganui can have a strong day tomorrow and have at least one win against either Bay of Plenty or Wellington they stand a good chance of making the semi finals.

This is shaping up to be the most important day if the team is going to contend for the semi-finals, with matches against Bay of Plenty and Wellington, whom have started the comp as group favourites. At least one win today will put the team in a stong position to challenge for a semi final position.

The morning match up is against a solid looking Bay of Plenty line up that are also unbeaten in the group. This is easily the hardest match up so far this week therefore the girls needed to lift a gear. Despite a close finish the team eventually went down 4 - 1, with the Bay of Plenty team perhaps showing their depth and experience. With 5 holes to play we still had a chance with Emma alredy winning her match, and both Brydie and Amber-Rose all square. Unfortunately the bay team came home the strongest to take out both of the close matches on the 17th hole. Emma is continuing  her fine form and so far remains unbeaten with 4 wins from 4. Emma defeated the usually well performed Grace Senior 7/5. Karen Manninen recorded her first loss of the event, however is still having a very good tournament so far. The loss to Bay of Plenty is by no means the end of the road however. If we can defeat Wellington this afternoon we will still be in a good position leading into the final round robin match against Hawkes Bay.

After the morning loss the semi final chances for the team is going to rest heavily on the performance against one of the pre-tournament favourites Wellington this afternoon. The match remained tight throughout the afternoon, but through 9 holes Wellington were just in front, but not by much. At number 5 Karen Manninen showed superb grit and determination to turn her match around after being a couple down early to produce a fantastic win for the team, to give us a chance of rolling the Wellington team. Unfortunately a strong performance from International rep Julianne Alvarez, resulted in a loss to number 1 Brydie Hodge. At number 4 Leanne Corbett, had another great win, to give the team a real opportunity, of producing what many other golf followers would consider an upset. Amber-Rose unfortunately went down in her match, which left the result hinging on the number 2's. Emma Clayton so far is unbeaten, and her match against Te Rongapai Clay was close throughout. Eventually the match came down to the last green all square with both girls having birdie putts. Both girls missed their putts, to halve their match and the team match. Looking at the group table the half was still enough to keep us in the contest for the semi final. A win against Hawkes Bay would mean we go ahead of them on the table, however, we really need front runners Bay of Plenty to also beat of halve with Wellington. We look forward to the results tomorrow. The refresh button on the internet will get another work over throughout the morning.

Todays final round was a great opportunity for the team to challenge for the semi-final spot, however had to beat Hawkes Bay, and we still needed Wellington to do no better than a half against group leaders Bay of Plenty. The match throughout looked close but with losses to Karen Manninen, and Leanne Corbett it all came down to how the top three players feared. Amber-Rose was 1 down early but got the match back to square with 5 holes to play. Both Brydie and Emma had close matches throughout, and led part way through. In the end it came right down to the final hole but Emma and Amber both halving their matches. Brydie finished with a great win 4/2 over Hawkes Bay number one Kate Chadwick. This meant that Hawkes Bay won 3/2 and earnt themselves a place in the semi-finals. Wellington's 2.5 - 2.5 result against Bay of Plenty would have meant that one more match point against Hawkes would have got our team into the semi-final. However not to be this year. The girls can take great encouragement on how close they came, and will no doubt give them confidence for next year. It is certainly very encouraging from a district point of view that we have come so close two years running, compared with the number of years we were not strong enough to put up a significant challenge.

Well done girls, we think with another years experience and improvement that next year will be your year!

Manawatu Wanganui's final group placing of 4th meant that they were to face the 4th team in the other group to play off for 7th and 8th position to decide the seedings for the 2014 event. This meant a match up against Northland. While the girls were very disappointed to narrowly miss the semi-finals, a win against Northland would be a good way to finish off the tournament. Our top three players, Brydie, Emma and Amber-Rose all came through with wins to secure the team win 3/2. For Emma this capped off an unbeaten tournament with 5 wins and 2 halves, a great effort at number 2.

In the battle for the overall championship, Auckland played Bay of Plenty in the final, and it proved to be very one sided with the stong Auckland team prevailing 5-0, for their third straight Interprovincial win.